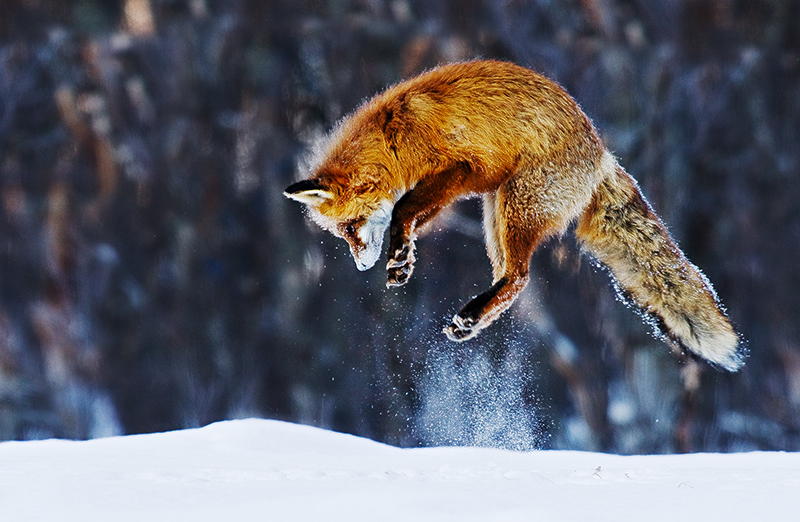 The Red Fox (Vulpes vulpes) is a highly oppertunistic and generalist species with great adaptability, which is displayed by its food pallet. It prefers small rodents and bird eggs, but it may also target rabbits, game birds, reptiles, invertebrates and young ungulates. Fruit and vegetable matter is also eaten sometimes. If it can not see or smell its food item it detects its food item through sound.

Right before the moment that I took this shot it seemed that this red fox was just sitting in the snow, howerver looking more closely it became clear that it was listening. It started creeping around very slowly and suddenly it jumped up and threw itself facedown in the powdery snow. It ran off with a Mouse in its beak. This hunting technique is called pouncing and is an excellent example of how adaptable this species is.

After fox hunting got largely banned in The Netherlands and its surrounding countries the Red Fox started spreading throughout The Netherlands. Currently, it can be found basically everywhere, from the dunes to forests and even in cities. The urban fox has become quite a problem for some people. Disrupting rubbish bins, stealing chickens and wrecking gardens, the urban fox can become a nuisance. Most complaints about urban foxes made to local authorities occur during the breeding season in late January/early February or from late April to August, when the new cubs are developing.