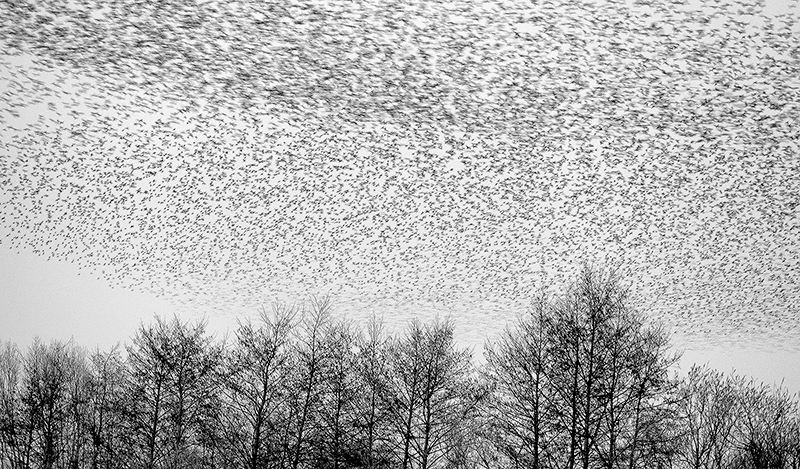 The common starling (Sturnus vulgaris), also known as the European starling, or in the British Isles just the starling, is a medium-sized passerine bird in the starling family, Sturnidae. It is about 20 cm (8 in) long and has glossy black plumage, which is speckled with white at some times of year. The legs are pink and the bill is black in winter and yellow in summer; young birds have browner plumage than the adults. It is a noisy bird, especially in communal roosts, with an unmusical but varied song. Its gift for mimicry has been noted in literature including William Shakespeare. This species is omnivorous, taking a wide range of invertabrates, as well as seeds and fruit. It is hunted by various mammals and birds of prey, and is host to a range of external and internal parasites.

Large flocks typical of this species can be beneficial to agriculture by controlling invertebrate pests; however, starlings can also be pests themselves when they feed on fruit and sprouting crops. Common starlings may also be a nuisance through the noise and mess caused by their large urban roosts. Introduced populations in particular have been subjected to a range of controls, includiing culling, but these have had limited success except in preventing the colonisation of Western Australia.

The species has declined in numbers in parts of northern and western Europe since the 1980s due to fewer grassland invertebrates being available as food for growing chicks. Despite this, its huge global population is not thought to be declining significantly, so the common starling is classified as being of least concern by the International Union of Conservation of Nature (IUCN).

The common starling is a highly gregarious species, especially in autumn and winter. Although flock size is highly variable, huge, noisy flocks may form near roosts. These dense concentrations of birds are thought to be a defence against attacks by birds of prey such as peregrine falcon or Eurasian Sparrowhawks. Flocks form a tight sphere-like formation in flight, frequently expanding and contracting and changing shape, seemingly without any sort of leader. Each common starling changes its course and speed as a result of the movement of its closest neighbours. This particular flock contained about 50000-60000 birds. The wooshing sounds and different forms in the sky from close range were absolutely stunning and are still engraved in my mind.