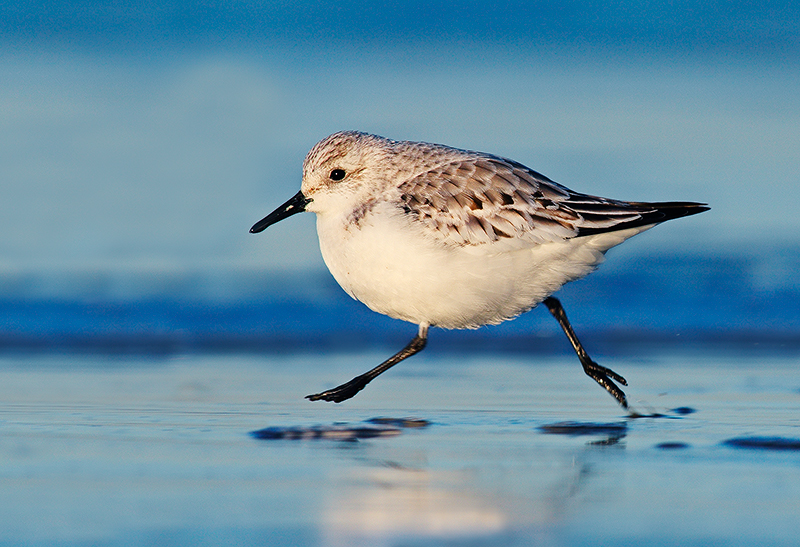 Have you ever walked over the beach during winter and feeling your mind played tricks on you? You thought that you saw a white speck moving back and forth in the surf but at the same moment it was gone. Chances are pretty high that you saw a sanderling. The sanderling (Calidris alba) is a small wader bird. It is a circumpolar Arctic breeder, and is a long-distance migrant wintering south to South America,  Southern Europe, Africa, and Australia. It is highly gregarious in winter, sometimes forming large flocks on coastal mudflats or sandy beaches. Sanderlings feed on invertebrate prey buried in the sand in the upper intertidal zone. When the tide is out, these crustaceans live in burrows some way beneath the surface. When the tide comes in, they move into the upper layers of sand and feed on the plankton and detritus that washes over them with each wave. They then burrow rapidly down again as the water retreats. They leave no marks on the surface, so the sanderlings hunt for them by plunging their beaks into the sand at random, consuming whatever they find. SInce they have to consume a lot of prey items to fill their bellies they move at incredible speed. Sometimes it seems like they are almost floating above ground because of the enormously rapid movement of their legs. For this particular shot I wanted a photo of a sanderling in full split to show off their speed, it took be about 5000 photo’s before I got this one.